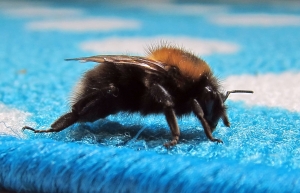 Even flowers get jilted, it turns out. If a flower's special bee goes missing, other bees will "cheat" on their own flowers in order to fill the space.

In any given ecosystem, the relationship between bees and flowers is complicated -- only certain bees will pollinate certain flowers. Anyone who learned their natural history from "The Lion King" would be amazed to find out how intricate the Circle of Life really is. It's probably not even a circle. It's a rhombus or something. A dodecahedron.

So, in the true spirit of "what happens if I prod this bit?" that has guided all science since approximately the invention of opposable thumbs, scientists have been studying what happens if you remove even a single species of bee from a local habitat.

And the answer is: lots. Bees will "betray" the flowers that they're supposed to pollinate, in order to pollinate the flowers which no longer have a special bee to call their own.

Of course, there's a more serious side to this than just the amusing idea of a flower and a bee having a deomstic tiff. The findings mean that if just a single type of bee goes missing, the results for wildflowers can be severe.

"We found that these wildflowers produce one-third fewer seeds in the absence of just one bumblebee species," says Emory University ecologist Berry Brosi, who led the study. "That's alarming, and suggests that global declines in pollinators could have a bigger impact on flowering plants and food crops than was previously realized."

"When bees are promiscuous, visiting plants of more than one species during a single foraging session, they are much less effective as pollinators," Said Brosi's colleague Heather Briggs of the University of California-Santa Cruz.

Red Flowers tell Birds What to Do