Over the bank holiday weekend something special was going on over on the other side of the world. Its very big, smells like decaying flesh, has a brother called Clive and lives in the Niagara Parks Floral Show house in Canada and happens to be one of the tallest flowers in the world. Morph, the Titan arum tops out at a whopping 2.41 metres tall and flowered this weekend making it only the 151st time a cultivated Titan arum has bloomed since records began in 1878, when the first seeds were brought back from Sumatra by Italian botanist Odoardo Beccari.

One flowering of a Titan arum is rare enough but in just over a week its expected that Morphs brother Clive will begin to bloom making it the 152nd bloom ever! 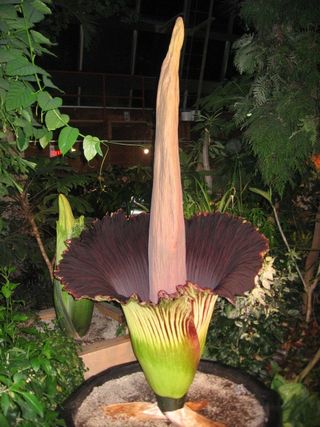 Facts About the Titan Arum

Its full name is the Amorphophallus titanum which translates to “giant misshapen penis”, fully understandable when you look at it.

David Attenborough gave it the name Titan arum, as he didn’t want to say Amorphophallus repeatedly on television.

It’s the world’s smelliest flower in existence as it’s pollinated by flies which are attracted to rotting flesh hence the smell.

The flower grows at a monstrous rate, 2-5cms a day initially and then by up to 10-15cms a day by the time its getting close to blooming.

How the Monkey Puzzle got its name