Each year on the 14th of February, people all over the world exchange gifts with loved ones (or attempt to woo crushes) in observance of Valentine's Day. It's a tradition we take for granted nowadays, whether you are in a relationship or you are a secret admirer. But how many of us know about the historical roots of the tradition and why it continues up to the present day? We decided to delve a bit deeper into this most romantic of all occasions to find out how and why Valentine's Day originated.

Legend has it that Saint Valentine of Rome was sent to prison after he performed weddings for soldiers who were not allowed to marry. Whilst in jail, it is said that he was reposible for healing the daughter of his imprisoner, Asterius. Prior to his execution, he sent her a letter signed 'Your Valentine.'

Valentine of Terni was bishop of Terni around AD 197 and is thought to have been martyred as a result of the persecution under Emperor Aurelian. Curiously, there is also thought to be a third saint Valentine of whom there is some reference to in early 'martyrologies' under the date of February the 14th. He is thought to have died in Africa; other than this, nothing is known of him.

February 14th is celebrated as a St. Valentine's Day in numerous Christian denomenations and there are also many different legends and folk traditions associated with this day. However, it wasn't until the 14th century that this special day came to be widely associated with romantic love. This connotation did not occur until Geoffrey Chaucer's poem Parlement of Foules transformed the nature of the holiday which in time gave birth to the customs we associate with February the 14th today. Written to honour the anniversary of the engagement of King Richard II of England to Anne of Bohemia, the poem contains the following lines:

For this was on seynt Volantynys Day

Whan euery byrd comyth there to chese his make 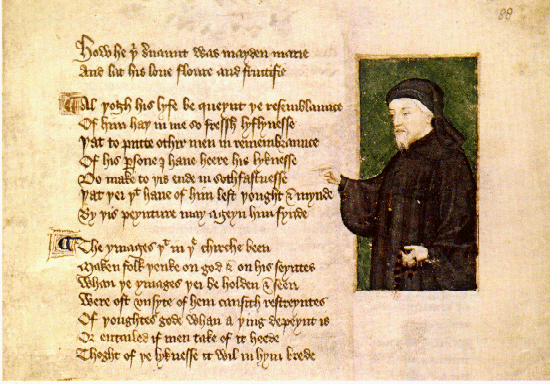 This translates as "For this was on St. Valentine's Day, when every bird cometh there to choose his mate."

If we go further back in time, however, there could be reason to think that the romantic element of Valentine's Day ties in with Lupercalia, an ancient Greco-Roman festival which was observed on the 13th to 15th of February. In 18th century author claimed that men and women drew names from a jar to make couples, and that modern day Valentine's card giving originates from this tradition. There is some dispute over this claim, however, as it was made without proof by the author. It seems more likely that this tradition actually stems from the Middle Ages with men drawing the names of women randomly to couple with them. (A riskier, more simplified version of online dating, if you will.)

Another possible explanation for the romantic aspect of February 14th can be found in the Charter of the Court of Love, issued in 1400 by Charles VI of France in 1400. The festivities incorporated amorous song and poetry competitions amongst other activities. Attending ladies would hear, and rule on, disputes from lovers. (A more simplified version of Jeremy Kyle, if you will. Or maybe a more sophisticated version, thinking about it.)

It seems there is no one historical event or tradition that accounts for Valentine's Day alone, rather, the occasion originates from the culmination of various historical facts and legends. Stay tuned to the Clare Florist blog over the coming days to find out how we got from the 5th century to the present day...