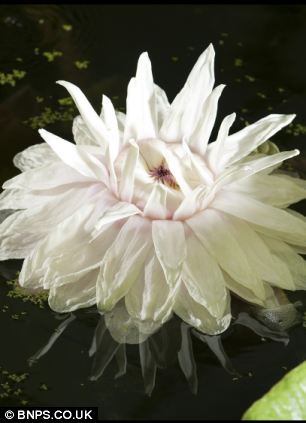 (because sometimes, a headline is too much fun NOT to write...)

Botanists are attempting to create the largest lily pad in the world by cross-pollinating two existing species.

And in order to do this, one 17-year-old trainee has had to play the role of scarab beetle by hand-pollinating a plant, a role that would normally be carried out by beetles in the wild Amazon rainforest.

The biggest lily pad in the world to date, at Kew Gardens, had a diameter of 8 foot 9, but the botanists behind the new project, at Ventnor Botanical Gardens on the Isle of Wight, are hoping that they can grow one over 9 feet in diameter.

Chris Kidd, curator of Ventnor Botanical Gardens, said: 'The reproduction cycle of the giant water lily is a fascinating thing.

'The first night's flower is bright white and very highly scented like pineapple to attract a pollinator, in this instance a scarab beetle.

'When the scarab beetle enters the flower it is inclined to stay inside it because it feeds on the flower's nectar-sweet glands plus it is about five degrees warmer inside the flower.

'The flower then closes its petals, trapping the beetle inside. The following night, the flower opens again but this time it's red and it has changed sex to male.

'By this point the scarab beetle has eaten all the plant's food so it goes off in search of a white flower, and pollination takes place.'

Why You Should Send Lilies for Birthdays in May

Even Cavemen Said it with Flowers