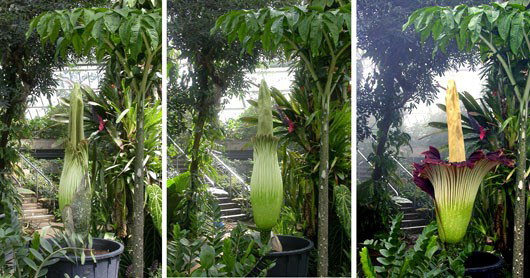 The Titan Arum, the ‘corpse flower’ of western Sumatra, has a bizarre way of spreading its seed.

And the reason Titan Arum is called the corpse flower? Because it uses flies and other carrion-feeding insects as pollinators; so instead of the sweet scent of honeysuckle or fuchsia, it gives off a powerful waft of rotten meat to attract these malodorous beasties. You can find a piece from Clare Florist on the weirdness of corpse flowers right here.

And now another captive Titan Arum has made the news. Because there’s one more thing about the blooming of the Arum; that two day window only occurs once every three to ten years.

And a few months ago, just this happened at the Ohio State University in America. Teams of botanists, no doubt humming the Mission Impossible theme under their breath and feeling very important, sprang into action.

The problem with pollinating the Arum in captivity is that even though Ohio State has five of the flowers, the chance of two blooming at the same time in order that one may pollinate the other are extraordinarily unlikely. So when ‘Jesse’ the flower began to bloom, the Ohio State team had to be quick. They waited patiently for the right moment, when Jesse’s flower finally unravelled from its spadex, and then they struck. Using pollen saved from another plant, ‘Woody’, which had bloomed in April 2011, they painted Jesse’s stigma with pollen.

“I came in to check on it and it still wasn’t starting to bloom,” he said. “Then 30 minutes later, I got a call from them saying it was blooming ... it happens that fast.”

“It got what it needed, so it closed up.”

Now, Jesse bulges with fruit, showing that the pollination was successful. This is a huge relief for botanists, who are concerned about the plant becoming endangered, as Mo Fayyaz of the University of Wisconsin explains:

“We have a good bank of this plant in case something happens in Sumatra or it becomes really, really endangered,” Fayyaz said. “Always we have a backup. In a way, you could say we are saving the species.” 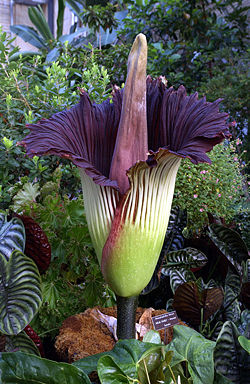 By Credits: US Botanic Garden. [Public domain], via Wikimedia Commons

30,000 Year-Old Flower Brought Back from Death