Even Cavemen Said it with Flowers 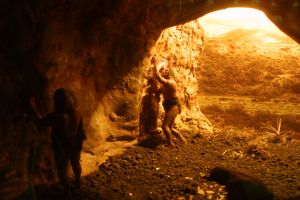 Nowadays, it's normal to celebrate many different occasions with a lovely bunch of flowers (such as the gorgeous bouquets on Clareflorist.co.uk -- nudge nudge, wink wink!). But new research shows that this isn't a modern idea at all -- indeed, people may have been "saying it with flowers" for over fourteen THOUSAND years!

The new discovery is a cave on the slopes of Mount Carmel, in modern-day Israel. The cave is called Raqafet Cave -- and it is here that scientists havge found concrete evidence that early humans buried their dead with flowers.

The flowers have, of course, long since withered into dust, but the imprints of their stems can still be seen on the hardened mud of the cave floor.

We will never know if flowers meant exactly the same for our distanct ancestors as they do for us today. But Leore Grosman, an archaeologist at The Hebrew University of Jerusalem, thinks they might. She says that the new findings give "important clues to the views about death and dying in the Natufian culture," and may have been given to make the dead feel "comfortable" and show "concern about their well-being in the after-life."