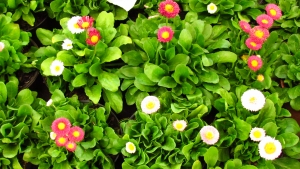 We've just spotted some heartwarming news from the other side of the globe.

One very special flower and cactus stall at Fujian Agricultural and Forestry University has been putting an unusual business model into practice, which involves relying on the kindness of others to get by.

The stall is unmanned, save for a little blue piggy bank, and a sign asking customers to please drop their money in the piggy.

And amazingly, shop owner Liu Haisheng says that in two years, he has sold 20,000 pots without ever being shortchanged. He started running the 'honesty policy' when he opened his business while still a student -- often, he would have to leave the stall to run to class, so he tsarted leaving the piggybank out.

Now, he only stops by the piggy bank a couple times a week -- and has even opened up five more stalls. Now there's a story to restore your faith in humanity!

Plant a flower, save a butterfly

Flower Art refuses to wither away