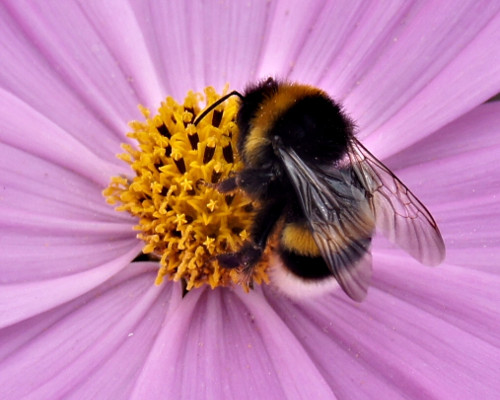 According to recent research, it isn't only humans who get a kick out of caffeine. According to a recent article in Cosmos popular science magazine, bees are more attracted to flowers which have nectar laced with caffeine. It has already been proven that low doses of caffeine improves memory in mammals, so it is perhaps not particularly surprising to learn that caffeine helps boost bees memory and increased speed of learning.

The nectar of plants such as coffee and citrus are known to contain low levels of caffeine amongst other compounds; these are mainly found in the leaves which lends them a bitter taste to make them unpalatable to herbivores.

New research from the University of Toronto indicates that these plants may be allowing small amounts of caffeine to trickle into the nectar as an incentive to pollinators. A 2005 study from the University of Haifa had already shown that bees exhibited a preference for sugar solutions with low doses of caffeine to those without. This led to speculation that this prefence might have an effect on the pollination success of a plant.

James Thomson of the University of Toronto decided to try to learn more about this possibility by conducting an experiment using fake flowers, each with either low, high or zero caffeine content. Bees were then left in an enclosure for 36 hours with 36 of these artificial flowers. The results showed that flowers with low levels of caffeine received the majority of the pollen transferred - 42% compared to 29% for both the zero caffeine and high caffeine laced flowers repsectively.

So it would seem that bees favour plants with a small amount of caffeine - just the right amount to perk them up without making them strung out and jittery. This will make sense to those of us unfortunte enough to know the sensation of drinking too much coffee and turning into a nervous wreck!

As the Cosmos article points out, this evidence all seems to point to an interesting symbiotic relationship between bees and plants with each evolving to influence the other to its own advantage.

Is it Spring Yet?

Bees love their morning coffee too!

Spring is in the Air

How Are Our Fresh Flowers Delivered?