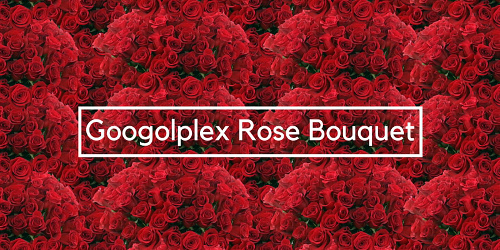 We’ve noticed a trend for larger than life bouquets lately with florists striving to surpass our 100 rose bouquets. In a spirit of competitiveness, we’ve been brainstorming ideas around the office about how we could go bigger and bolder than everyone else, leading us to come up with the following concept:

One of the largest numbers known to man is a googolplex. It was even the inspiration for the name of a popular search engine. A Googolplex is a one followed by 10 to the power of 100 zeros. So a lot of zeros then.

Of course, such an ambitious project is bound to hit upon a few stumbling blocks along the way. The fact that it is not even physically possible to write out a Googolplex in standard form – there isn’t enough space in the known universe – poses serious questions about the viability of our Googolplex Rose Bouquet project, questions concerned with costs, logistics and all those dreary real world things which always seem to get in the way of our pure and unbridled creative dreams.

So if the Googolplex Rose Bouquet can’t exist in this universe, what’s to say it can’t exist in another universe? In fact, what’s to say that it doesn’t already exist in another universe already? If you subscribe to the theory that ours is but one universe existing in parallel to an infinite number of universes with an infinite number of possible outcomes, our Googolplex Rose Bouquet becomes theoretically possible. Just think of it out there floating in the multi-verse somewhere, an unimaginably large bouquet of roses created by yours truly.

Okay, so we’ve established that the Googolplex Rose Bouquet exists and that we’re responsible for it. The next step is to determine how we’re going to deliver an unfathomably large bouquet of roses. As excellent as our current courier service is, we fear they may object if we attempted to send 10(10100) roses. Then again, perhaps their parallel universe equivalent in which this bouquet exists is already au fait with such mind-bogglingly large consignments. One can only hope.

We’d also have to think about packing the bouquet for delivery – it’s unlikely that our standard signature green flower delivery box would cut it. Also, consider the amount of stay fresh hydroponic gel and decorative wrap such an ambitious bouquet would necessitate. Again, we can only hope and presume that these details have been addressed by the parallel universe version of Clare Florist. No doubt there were some kinks to iron out but we trust our multi-verse equivalents have worked through any teething issues with admirable resolve and ingenuity, befitting of their current universe counterparts.

If you’re still reading, we can guess what you’re probably thinking. Why stop at roses? Why stop at a Googolplex? How about a Graham’s Number Bouquet of Tulips? We have contemplated tackling such a project, but surely at a certain point this kind of thing just begins to resemble showing off a bit too much, doesn’t it?

How to Recognise Different Bouquet Shapes