The annual "Battle of Flowers" parade in Jersey is coming. This year there's a change in the organisation -- instead of the floats coming in one at a time, they are all going to be visible as the crowds file in.

And not everybody's happy about this! One exhibitor said: "If we get this long it could affect Battle for years. I can't understand why we would want to ruin the spectacle of Battle.

"You wouldn't go to the theatre and then stand around for hours watching the stage crew putting the stage together and the cast milling around getting dressed.

"You want the spectacle of watching the curtain go up and we are going to lose that. The paying public don't want to sit there watching dancers asleep on the ground watching a single float for an hour."

But ultimately, all of this is really an elaborate excuse to repost this amazing picture from the BBC site of a float from last year's parade, of two biplanes and a hot-air balloon made out of flowers.

That's BIPLANES. Made out of FLOWERS. 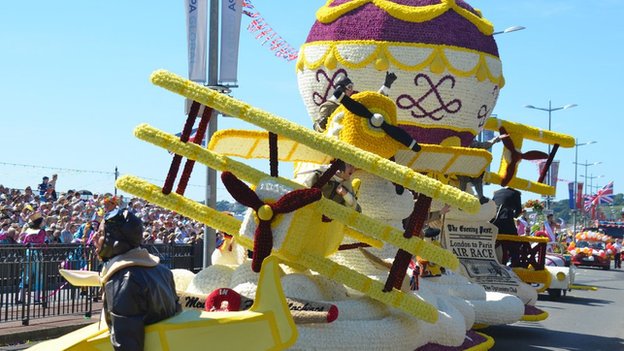 Orchid appears in Jersey after 84 years