National Flowers of the USA

So, who else is currently filling their veins with caffeine in an attempt to stay awake after watching the American elections late into the night?

For anyone who was more sensible than that and elected (ha!) to get a good night’s sleep instead, allow Clare Florist to be the first to let you know: President Barack Obama won re-election to the White House, winning at least 303 electoral college seats – he needed 270 or more to win.

But do you know what the national flower of the United States is?

The answer is actually the same as in England – the floral emblem of both countries is the rose.

It was officially designated the flower of the USA in 1986, when Ronald Reagan signed an edict which began:

“Americans have always loved the flowers with which God decorates our land.   More often than any other flower, we hold the rose dear as the symbol of life and love and devotion, of beauty and eternity.  For the love of man and woman, for the love of mankind and God, for the love of country, Americans who would speak the language of the heart do so with a rose.” 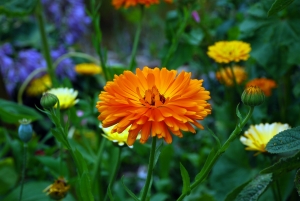 Some have also argued that the native marigold should be the USA’s national flower instead. In 1967, Everett Dirksen wrote:

“The marigold is a native of North America and can in truth and in fact be called an American flower.

It is national in character, for it grows and thrives in every one of the fifty states of this nation. It conquers the extremes of temperature. It well withstands the summer sun and the evening chill.”

As well as a national flower, the individual states of America have their own flowers. A few state-flowers that were particularly active in yesterday’s election include the Scarlet Carnation, the state flower of Ohio, which handed 18 vital seats to President Obama, and orange blossom, the state flower of usually-vital swing state Florida, which as of 9AM GMT on Wednesday morning, still hasn’t finished counting votes. Maybe it’s as sleepy as us…