The robots are taking over! Breaking new developments from Harvard Univeristy might just mean the end of florists as we know them, as human florists up and down the country are replaced by tentacled robots. We’ll be out of a job (especially if they learn to write blogs too).

Well, okay, no. That isn’t going to happen any time soon. But it is true that the boffins at Harvard have been doing some pretty impressive things with robot tentacles and flowers. Just check out this picture here (pic credit Harvard University / US Department of Energy / DARPA): 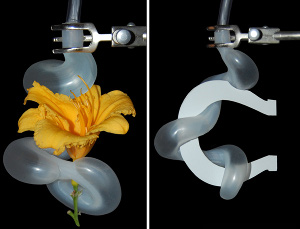 This is the first shot of a new robot tentacle which is so delicate that it cane entwine itself around a flower and pick it up without crushing it. Most robot hands would instantly destroy such a fragile bloom – but the new tentacle can pick up the  pretty wee bloom with no problems.

The new tentacle, designed by George Whitesides and his colleagues, has three separate air channels running along its length. Pumping air into these selectively, they can control the movement of the tentacle. Unlike previous efforts, this air-chamber system means that the new tentacle has a full 3D range of movement.

Categorisation of floral scents in the perfume industry.