Across Britain, Ireland, France and Italy, rugby diehards and fairweather fans alike are spending their weekends in pubs and living rooms at this time of year, yelling support for their favourite team.

(...while others, admittedly, sigh, and curl up with a book and wait for it all to be over)

So given that there NOTHING which doesn't make us here at Clare Florist towers think of flowers (that rhymed!), we're going to do a little mini-series, looking at the special links which these 6 fine nations -- Wales, Scotland, Ireland, England, Italy, France -- and their rugby teams have to flowers.

To avoid anyone getting annoyed at us not putting their team first, we'll be doing this in strict alphabetical order -- so that's England first!

There are TWO interesting flower facts about the English rugby team:

Fact one: England play with a red rose on their shirts.

Or, as the RFU's own website puts it: 'The England team has always used a red rose emblem on the left breast.We have no documentary evidence to explain exactly why'

The rose (updated to a disgusting-sounding 'corporate rose' in 1999) has been used on England shirts since 1871, and has been in use ever since. The RFU offer three possible reasons: because it is on the crest of Rugby school where the game began, because the red rose represents Lancashire and two of the people who chose the first England kits were from there.

Or, thirdly, simply because somebody didn't understand history very well, and thought that the rose was the symbol of England as a whole, not just of the House of Lancaster.

The truth is - who knows? But it's entertaining to think that, when those 15 big strong men take to the field ready to sweat and bleed for the red rose of English rugby, not one of the actually knows why they're wearing it!

But that shouldn't stop you from showing your support for England by getting your hands on the prettiest big bunch of red roses you can find - check out our gorgeous bouquet of 24 Red Roses: 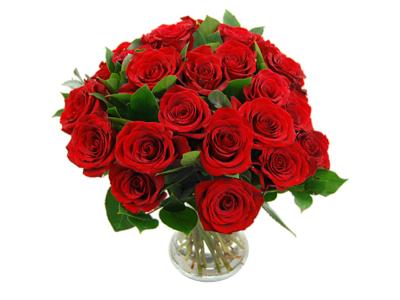