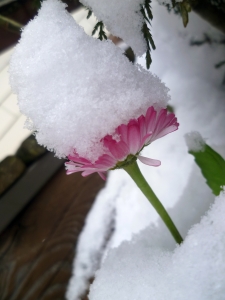 The National Trust's annual flower count has found an unusually low number of blooms for the time of year, because of late snow and ice making it hard for flowers to gain a foothold in the wintry soil.

Every year, the trust undertakes a 'Valentine's flower count", but this year the figures were extraordinarily low. The count normally expects to find high numbers of February flowers are blooming in Devon and Cornwall -- as the most southerly tip of the United Kingdom, these counties tend to be a little warmer earlier on.

But it was no-show from even these clement counties this year. In Devon and Cornwall, the Trust counted just 1,100 flowers -- compared to over 1,700 last year.

Mike Calnan, head of gardens and parks at the National Trust, said: “On the back of one of the wettest years on record, this past month of icy temperatures and snow, followed in some areas by a thaw, have certainly slowed things down in our gardens.”

Looking forward to the spring blossom

Wishing you a wonderful Valentine's Day