Time for an update on how the training's going for the London to Edinburgh charity cycle. And, after much pestering, I've got my hands on some new photos to share with you all, so have a look for yourselves and see how the lads have been getting on... 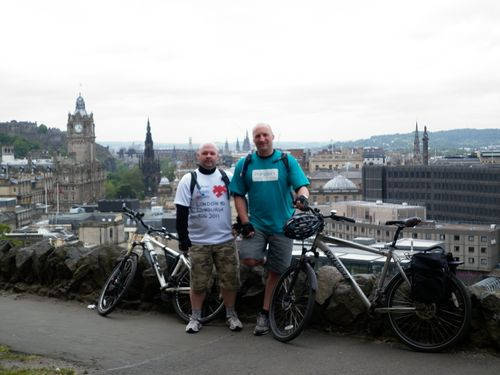 Since training began in January, every Sunday has seen a training session with the distance steadily increasing, and they're always looking for new ways to challenge themselves by changing up the route and finding harder climbs. Additional training in the week has been harder to organise, trying to fit it in around other commitments of work, family, and so on. It certainly seems to be paying off though, as Dave M has been telling me today:

So what adventures have they had along the way? Early on, Dave M suffered a bit of an injury after coming off his bike on a sharp bend and his poor foot still hasn't quite recovered, but he didn't let that put him off and was back trainng again straight after. Just the other day, they tasked themselves with the steep climb at the side of Edinburgh Castle. As they reached the top, they got talking to a Londoner who thought they were mad for having cycled up that hill - and that was before they told him of the main event!

The weather's given them some interesting experiences as well. As usual, the Scottish weather has been a bit unpredictable, so they've been out training in all sorts of conditions. Were any of you out in the crazy winds we had a couple of weeks back? You'd think that would put the guys off their training, but dedicated as ever they were even out in that! As it turned out, the wind on their backs on the uphill sections gave them a massive push - at times they made it up to 8th gear! Downhill though, the wind was against them making it a struggle to get past 1st gear, and having to pedal hard to not be pushed back up the slope - crazy weather indeed!

So quite a mix of experiences so far, and I'm sure there'll be lots more stories to share so keep an eye out for more news soon! If you're feeling generous, head on over to the JustGiving pages to sponsor in aid of Maggie's Centres or the Lothian Autistic Society. They're still a long way away from their targets for both causes, so your donations and any tips on raising even more for these amazing charities would be gratefully received.

Time to Party - It's our Birthday!