As the cold of autumn and winter begins to set you will no doubt close up those windows and doors, turn up the heating and bunker down for the winter months. During this time there is little scope for fresh air to replace the stuffy internal air, clearing out those pollutants that build up from everyday activities in the house. Studies into the number of toxins and pollutants that can be found inside the home by NASA found over 350 different chemicals. The most common being formaldehyde from plywood, foam insulation particleboard etc, Benzene in plastics, detergents, synthetic fibres and tricloroethylene, toluene and ammonia. NASA and later studies by Wolverton Enviromental Services inc and PCAC found that houseplants them selves can eliminate and reduce a good amount of potential pollutants and toxic chemicals. To enhance this effect they discovered by placing activated charcoal (charcoal which has been treated with oxygen to open up pores between the atoms) which has a surface area of between 300-2000 sq m’s per gram can absorb and store these toxins until they have been broken down by the roots, soil or microbes which break them down into harmless parts.

As a general rule of thumb you should have at least one 10-12 inch house plant for every 100 sq ft of space as well as focusing on your personal living area, the space you spend most of your time in whether its on the couch, the computer in a chair watching TV, where ever it is place a couple of plants in this zone at least.

The following comprehensive list is from http://www.sustainablebabysteps.com listing the beneficial types of houseplants should get you started in finding the right plants for your home.

Benefits: Not only can it be used for burns on the skin, it is also known to remove formaldahyde from the air.

Notes: Needs well-drained soil with slight drying between waterings, full sun is best with protection from high heats. Although largely known for its healing properties, it is considered to be an irritant to some.

Benefits: These houseplants clean the air by emitting high oxygen content, and purifies indoor air by removing chemicals, such as formaldahyde or other toxins.

Notes: Likes filtered light, infrequent watering and rich soil. I've found conflicting information as to whether or not this plant contains any poisonous parts. 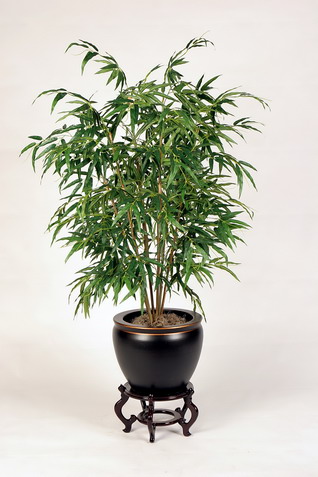 Benefits: According to NASA, it removes formaldahyde and is also said to act as a natural humidifier.

Notes: Likes bright, indirect light and prefers to remain moist but not too much and doesn't like sitting in water.

Benefits: Said to act as a natural air humidifier, removes formaldahyde and is a general air purifier.

Notes: Likes bright light and damp soil but can be tolerant of drought or partial light.

Benefits: Emits high oxygen content, and purifies indoor air by removing chemicals, such as formaldahyde, benzene or other toxins.

Notes: Does well with full shade and good draining; variegated plants need more sunlight. The sap of this plant is considered poisonous and is an irritant.

Benefits: Known for removing formaldahyde and known generally as one of the houseplants that clean the air.

Notes: Does great with low light and low water.

Benefits: Its known for removing the chemical benzene, a known carcinogen found in cigarette smoke, detergents, pesticides, and the off-gasing of other synthetic materials and is said to be fantastic for asthma and allergies.

Notes: Can be invasive, making it great for a potted plant.

Benefits: NASA says this plant is fantastic at removing benzene, a known cancer-causing chemical. It also absorbs carbon dioxide and gives off oxygen overnight, which is said to improve your sleep!

Benefits: Known for purifying the air of the carcinogen, benzene, commonly found in the off-gasing of synthetic materials, ciagerette smoke and other household chemicals. Also known for removing formaldahyde, xylene (found in varnishes, paints and paint thinners) and trichloroethylene (found in solvents) from the air.

Notes: It requires little attention, tolerates dry soil and irregular watering and prefers no direct sunlight. It is, however, susceptible to fluoride toxicity (so fluoridated water sources may need to be avoided).

Notes: Thrives in high humidity, lots of light (but not hot, mid-day sun) and thorough waterings with, unlike many types of houseplants, almost complete drying out between.

Notes: Likes partial sun, and lots of water. Although they're among the houseplants that clean the air, they only flower once and are generally annual plants, especially when planted outdoors.

Benefits: Known for removing benzene, a common household chemical and known carcinogen. It's also said to remove mold spores in the air making it great for bathrooms, kitchens and laundry rooms and purifying the air of trichloroethylene, a chemical found in cleaners and solvents.

Notes: Easy to care for, it prefers lots of water, less often and bright, indirect light.

Notes: Philodendrons are considered poisonous, so keep out of the reach of children and pets.

Benefits: Found by NASA to absorb toxins, such as nitrogen oxides and formaldahyde.

Notes: It tolerates low light levels and irregular watering (and needs only a few waterings throughout winter).

Benefits: NASA places this plant among the top 3 types of houseplants that are great at removing formaldahyde. Also removes carbon monoxide and other toxins or impurities.

Benefits: Known for removing trichloroethylene, a chemical found in many solvents, dry cleaning solutions and refrigerants.

Notes: Moderate sun and water needs, but, like most types of houseplants, dislikes sitting in water. Avoid fluoridated water sources.

Notes: Prefers bright light and sun, but is also shade-tolerant. Moderate water needs for these types of houseplants.