Our look at some of the more interesting and bizarre plants that have evolved over the time has seen us look at a few different types of carnivorous plants from the Venus fly to the Bladderworts each with a unique trapping mechanism. Today we look at the simplest of all the carnivorous plants, one I am sure you will have seen before and recognise, the pitfall trap Pitcher plant. 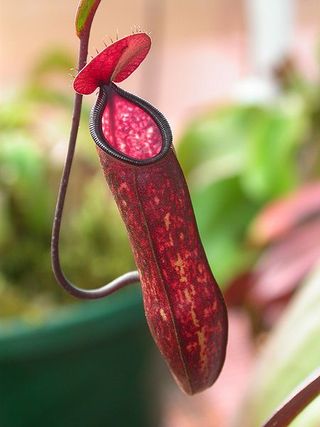 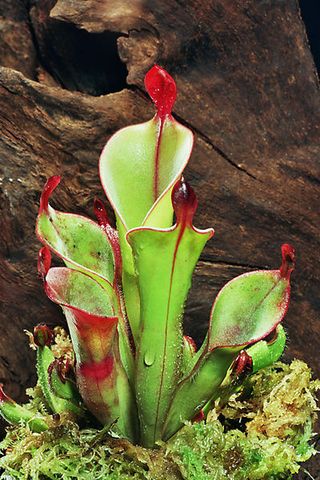 Found mainly in Malay Archipelago in far east Asia, the pitcher plant like all the carnivorous plants we have covered evolved from the selection pressures of its environments poor soil and nutrient content. Needing to acquire its life sustaining nutrients from another source the pitcher plant  evolved a pit fall trap mechanism of capturing its prey that many believe over time has formed from the leaves of the plant folding in to create a deep cone. Pitcher Plants have two main families that differ in the size and location of the trap, the Nepenthes and Sarraceniacea. Nepenthes grow as offshoots at the end of tendrils from the main part of the climbing plant where as the Sarraceniacea grow directly from the ground and their entire leaves form the pitcher trap but both mechanisms of trapping work the same.

Attracting foraging, flying and crawling insects to its cavity, the pitcher plant lures them to the opening of the trap through colourful pigments and nectar brides. As covered in a post last week, the surface of the inside of the pitcher plants trap is so smooth it is being used as the basis of a revolution in non-stick coatings. This exceptional smoothness means that once an insect makes its way into the trap it loses its grip and falls into the liquid at the bottom known as phytotelmata. Unable to climb back up the smooth surface, the insects drown and are broken down by a soup of enzymes secreted by the pitcher plant or through bacterial action from external microbes which live in the phytotelmata. The end result is the prey is broken down into a solution of amino acids, peptides, phosphates, ammonium and urea from which the plant obtains its mineral nutrition.

Mother's Day Bouquets for under £35

Tips for Tuesday - Watering those flowerbeds