Unbeknown to many I am a bit of a computer buff so what best than the recent event started for the Manchester Science Festival in October that combines my love for computers and flowers into one big flowery science experiment involving Alan Turing, Sunflowers and Fibonacci Numbers.

The Manchester Science Festival needs all our green fingers for a mass planting of sunflowers to help solve a mathematical riddle that Turing worked on before his death in 1954.  The puzzle is the conundrum of Fibonacci numbers and their appearance in nature, from cloud patterns, rock formations and snail shells there are numerous examples of this special sequence popping up in nature. This special sequence is rather easy to generate all we need to do is begin with the numbers 0 and 1 and then add them together. Take the total and then add the previous number and its as simple as that. The first few numbers are

So your probably wondering what all this has to do with sunflowers and Turing. Before his death Turing was working on a theorem for the appearance of Fibonacci numbers in nature, and in particular how things such as the spirals in sunflowers occur. Since his death the theorem has not been as the last recorded experiment into the phenomenon was in 1938! 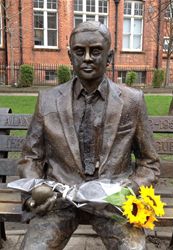 So to the part where we can help.

To test his hypothesis on a large enough scale the Museum of Science and Industry in Manchester is wanting as many people to plant sunflowers between April and May, nurture then throughout the summer and when they are fully grown to count the seed spirals and submit the answer online! So get those dusty plant pots out the shed and be take part in one of the many events going on this year to celebrate 100 years since the birth of Alan Turing by helping solve one of the last riddles he was working on!

Hip, hip hooray - Spring is on its way!