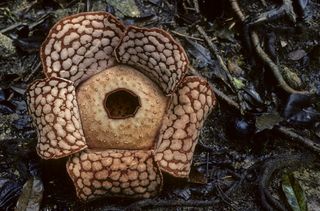 Do you remember Little Shop of Horrors? The musical where a huge cannibal plant named Audrey II, with cries of ‘Feeeeed meehhh, Seymour!’, comes to take over an entire city? The show ends with a raucous musical number offering the audience one piece of advice: Don’t Feed the Plants.

Well, we reckon we might just have found Audrey II’s real life equivalent. Rafflesia cantleyi, the parasitic ‘corpse flower’ (don’t ya just love it already?) of Borneo/Malaysia  has been revealed to exhibit some very creepy behaviour indeed. Not content with just smelling like rotten flesh to attract flies and scavenging beetles as pollinators (what’s wrong with a nice bee, that’s what we want to know? They’re fuzzy and like honey), it has been revealed that the cadaverous bloom has been going around stealing chunks of its host plant’s DNA.

The corpse plant, you see, is a parasite. It attaches itself to grape vines, figuring that if grape plants are daft enough to grow their own structures, then the corpse plant isn’t going to be mug enough not to use them. But now scientists from Harvard University’ Herbaria have discovered that the creepy corpse plant is actually using the poor grapes for much more than just support: it’s taking what they are.

The corpse plant now has a section of its genetic code which is more like its host’s genes than it’s own – despite the two plants being genetically separated by more than a hundred million years of evolution.

And as if the whole thing wasn’t odd enough, the scientists who discovered this aren’t even entirely sure why ol’ corpsey is doing this. ‘At the outset, we wondered if it could be that a subset of these genes might provide some defence from the host mounting an attack,’ said Harvard's Professor Charles Davis.

‘However, the genes coming to the flowers represent a broad swath of functions, including respiration, metabolism and perhaps some useful for defence. If so, these findings might reflect a sort of genomic camouflage, or genomic mimicry for the parasite.’ 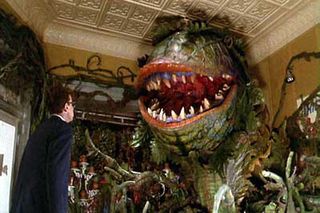 So remember, kids: don’t feed the plants. Especially not with bits of your genetic code; who knows what they might get up to.

How do plants survive in the hot desert?

Top Tips for Tuesday; Flowers to Grow in June