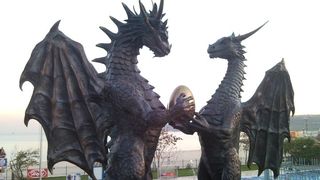 There can’t be many of us who don’t get a joyous shiver just reading that word. From folk tales and fairy stories, through to great books like The Hobbit and modern film such as Shrek, dragons have always sparked (ahem) the human imagination.

So is it any surprise that when ancient cultures of long-ago first came across the Dracaena Cinnabari tree, and found that its sap ran a thick and liquid red, their minds leapt instantly to tales of these great fiery beasts? Whether that is how it went or no, the result remains: D. Cinnabari was dubbed the Dragon’s Blood Tree. 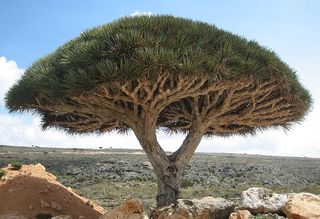 This mystical tree is found on the island of Socotra. Its appearance truly is weird and wonderful; it has been described as possessing a ‘upturned, densely-packed crown having the shape of an upside-down umbrella’

And the reason for that name, of course, is the dark red resin which it exudes: the ‘Dragon’s Blood’.

The Dragon’s Blood Tree doesn’t just have an epic name, it’s pretty awesomely useful too: its gum resin is used in toothpaste, it’s root in rheumatism, and its laves are a useful carminative. And the Dragon’s Blood itself? Socotrans uee it for everything from a dye to a lipstick, on account of its awesome red colour.

Time to Party - It's our Birthday!