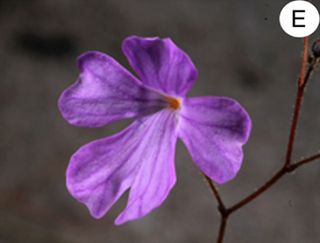 As you all well know by now, there's nothing we love more at Clare Florist than a plant which gives us the shivers (don't worry though, we won't be putting any in your bouquets!), so we were thrilled - sort of - this morning to read all about a new discovery by scientists working in Brazil; flowers that eat animals ...underground!

We've actually known (that's "we" as a species, not me personally. I don't know much about nuffink, me) about the flowers in question for ages. Or at least, since the year 2000. We just never suspected until January this year that they were scoffing away on worms under the surface.

The flowers in question are called Philcoxia minensis, Philcoxia goiasensis and Philcoxia bahiensis, and all three of them live in the Brazilian high savannah.  They're related to snapdragons, those cheerfully bitey plants that you may well recognise from your own garden.

And it turns out they eat worms underground. The Philcoxias live in very loose, sandy soil, where there isn't a whole lot in the way of nutrients going around for them to consume. So they've learned a very clever, very evil way to supplement their diet. As well as leaves above the surface, the Philcoxia have tiny circular leaves underneath the soil, which have a really sticky surface. Passing nematodes - tiny worms - can get stuck to these leaves, and then the plant consumes them using powerful enzymes. Nom nom, worms!

This microscope image (by the National Academy of Sciences) shows the poor little nematode homing in on the deadly leaf: 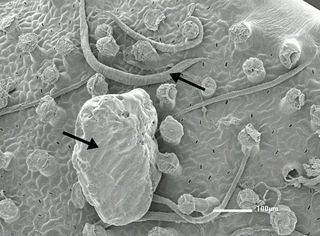 Of course, these Brazilian carnivores aren't the first carnivorous plants we've ever found. Plenty of above-ground meat-eaters, like the infamous Venus Flytrap, are well-established. We've even met tiny fungi which attach themselves to nematode worms as parasites. But this is the first plant we know of that hunts and catches its prey in this unique fashion - and now that we know about its techniques, it opens up the possibility that there could be many more out there...

Biophilia - Why We Feel Connected to Flowers

Plant does nothing for 25 years, suddenly grows 3m spike