Can I just start by pointing out that this is my favourite blog title that I’ve ever written? ROBOT FLOWERS!

It’s almost as good as that headline that said ‘BOY TURNS INTO YAM’.

Okay, that said, let’s have a glance at the fascinating world of man-made, electronic flowers. Flower robots have been around for half a decade now; two scientific papers presented in 2007 seem to remain the biggest players in the field. One was called “Development of stem structure for flower robot using SMA actuators,” and talked about developing an accurate robot stem which would move in a similar way to the stem of a natural flower. 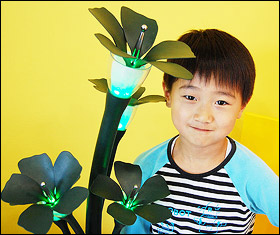 This picture, from 2008 (Credit: Chonnam National University/Yonhap News Agency), shows a flower robot developed by Korean scientists. This ‘flower’ was described in The Digital Chosun Ilbo:

“When a person comes within a 40 cm radius of the flower, its supersonic sensor perceives the approach, the stem bends towards the person, and the buds come into full bloom. When the person leaves, the plant returns to its original state. If a person’s voice becomes louder than a certain level, the flower buds will come into bloom, and the stem shakes slightly to suggest a greeting. When the room lights up, the buds open and close, and when music is played, the plant dances.”

So while we may not quite be ready for an I, Robot Flower world just yet, make no mistake; the machines are on their way!

Win a FREE 'Summer Splash' bouquet on our Twitter comp!