Flowers of the Future!

When I saw a blog this morning on the Guardian website entitled ‘Gardens: the Shape of Things to Come’, I thought that it might contain a few of the above possibilities.

After all, technology’s come a long way in recent years. We can carry the internet in the palm of our hands, we can make video calls on wireless phones, hell, we can even put a robot on Mars to wander about and shoot rocks. So who knows what magical biomechanical upgrades science might have in mind for the flowers in our hedgerows?

Unfortunately, the Guardian article turned out to be nothing of the sort. It was just a fairly dull gardening blog telling me that this was a good time to plant annuals. Yawn.

But why let that stop us? If we can dream it, we can blog it! Inspired by decades of science fiction and fuelled by my morning banana, here’s a few things that I can imagine happening in the future of flowers. Sort of.

Ever since Jules Verne wrote of projectiles landing from the moon in the 1860s, the future has always meant space. Why should flowers be any different? As global warming renders our planet uninhabitable, as the delicate petals of earthbound flowers fall plaintively to the earth, surely some scientists will take pity on the flora which have sustained the human race for so long, and make them a space suit?

I’m seeing the heads of dandelions and primroses, peeking out through the visors of moon-landing-style NASA spacesuits. I’d draw you a picture, only my pen won’t work on the screen. 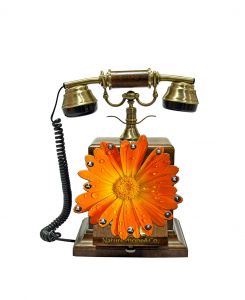 Let’s face it, Apple have got their fingers into every other pie (apple pie!) going, surely it can’t be too long before they decide to ‘revolutionise’ floristry as well? Apples are even kind of like flowers. Well, you know they’re. Okay not really. But you know what I mean.

So what would an Apple-made bunch of flowers look like? Well, it would be sleek, smooth and extremely well designed (much like, say, the Black Magic Calla Lilies bouquet from Clare Florist). Although, if Apple’s recent record is anything to go by, it might suffer a few launch problems, too. The voice-activated blooming probably wouldn’t understand Scottish accents, for one thing. And don’t expect your new iRis bouquet to tell you where you are…

3) Electricity generating robot flowers!
Imagine this: a steel icosi-dodecahedron flower, petals made of metal triangles and pentagons, artfully crafted together into the shape of a robotic flower, and lined with LED lights to softly illumine those petals, bringing a new robotic feel to the beauty of flowers. What’s more, these lights could be powered by miniature off-grid wind turbines, meaning that the robot flower’s glowing electricity actually powers itself.

Well, that’s just the most silly, far fetched idea of the lot, isn’t it?

With advances like that, it might not be too long before the flowers blast off into space and leave us all behind, after all. So long, and thanks for all the fuchsia!

The RHS Campaign for School Gardening: Gardening with Children