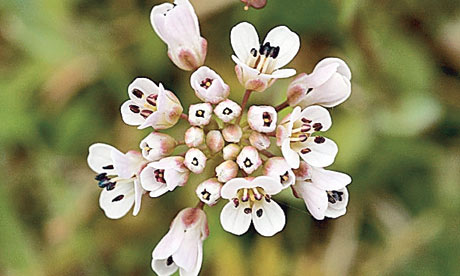 An amazing story from France graces the CF blog today, as we look at a little flower that could be used to do some real good in its local community!

At the site of some former mines in France, toxin levels in the soils are a real concern. Deposit-rich soils in Saint Laurent De Minier in the Cévennes have been mined ever since the Romans ruled in France. Today, there is over 500 times as much toxic metal in the surrounding soil as European standards allow.

But some plants have adapted to live in these terrible conditions. Three local flower species have learned to suck up the harmful toxins and store them out of harm's way, in their leaves. Now scientists think these remarkable plants could be put to good use.

It would take over 50 years for the three plants -- Noccaea caerulescens, Anthyllis vulneraria (kidney vetch) and Iberis intermedia -- to soak up enough toxins to restore the soil to normality. And another problem will still remain -- what to do with the toxins that now inhabit the leaves of the plants. That they could be used in drug manufacture is one possibility that has been raised.

But even qith these concerns still to address, it's a remarkable testament to the powers of flowers that thousands of years of mining waste could be solved in just half a century by these tenacious little flowers!

Why does the Corpse Flower stink?

One week until Valentine's Day!