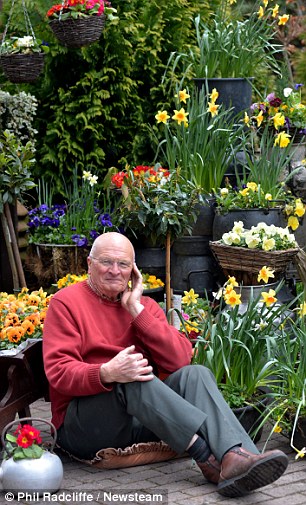 There have to be rules, but sometimes the rules could use a little leeway. A bit of give and take. So that beautiful things are allowed to happen.

Sadly, one beautiful thing is no longer being allowed to happen. A 69-year-old grandfather, Joe Poultney of Staffordshire, has been banned from selling flowers outside his home by Stafford Borough Council.

What makes the story even sadder is that Joe donates all of the money that he makes from the flower sales to a local children's hospice and his village church. He charges hardly anything -- just a pound for a tray of six flowers, so that he has a little money to give away.

The council say that Joe's colourful flower displays could distract passing motorists, and constituted a hazard as a result.

'This whole episode makes me feel quite sad because I won’t be able to give as much money to the children’s charity and the church as I did last year.

'I have always been interested in gardening and I grow a lot plants in my garden as a hobby now I have retired.

'At first I gave any excess plants I had to other residents in the village and then more people asked me whether I could sell some to them.

'If there were any left, I usually sold them for about £1 for a tray of six. It was never intended to be a business.

'I know the council is worried it might cause problems with congestion on the road, they even told me the colourful displays could distract drivers which could cause accidents.

'I have always asked people to park around the corner where Barlaston Methodist Chapel is and I walk to give them their plants.

'I also donate some money to the church for them letting me use the car park.

Metal Flowers which Bloom in Sunshine

How Flowers get their Shape