Red Flowers tell Birds What to Do

Flowers are telling birds to come and eat them - by turning red.

It turns out, that with climate conditions proving a risk to bee populations, some flowers are adapting by asking birds to pollinate them instead.

And just how do they 'ask'?

Red is a more attractive colour to birds, because the "spectral signature" of bright red colours is easy to pick up for their vision. Birds which feed on nectar are the most likely to spread flower seeds effectively, so the flowers are effectively "fine-tuned" to seem attractive to this type of bird.

The research has been done on Australian plants and birds, such as lorikeets (below), but seems likely to apply to flowers all over the world, as they figure out how to survive in a changing environment. 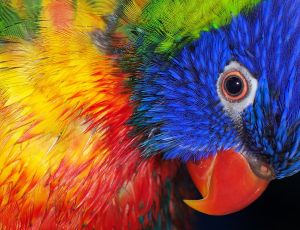 "We found that flowers exclusively pollinated by birds had initially evolved to suit insect vision, but more recently the spectral signature of bird-pollinated flowers had shifted towards longer wavelengths," said Mani Shrestha of the Monash School of Biological Sciences.

Seasonal May Flowers to Inspire..