This year, apparently, was the longest pollen season for over twenty years. For a lot of us, that probably doesn’t mean a lot. Who notices pollen? But for around 15 million people in the United Kingdom, the pollen season means only one thing: hayfever.

When you love flowers as much as we do, hayfever seems like a cruel affliction. Everybody loves receiving a huge bouquet of gorgeous-smelling flowers – so it’s a bit harsh on poor hayfever sufferers that they’re denied the simple pleasure of cramming their nose into the blooms for a right good sniff.

But help is at hand from our old friend Mr Science!

Scientists from the Instituto de Biologia Molecular y Celular de Plantas (that’s in Spain), have been playing around with the stuff of life, and have managed to genetically modify a strain of geraniums to produce no pollen at all – resulting in flowers which even a hayfever sufferer can sniff to their heart’s content.

The new flowers showed some other nifty characteristics too. They have brighter flowers, a more compact form, and more branches and leaves than regular geraniums. They also last up to four times longer than usual – sign us up!

It’ll be interesting to see just where this experiment ends up. Some experts are already starting to look ahead: Jean Emberlin of Allergy UK would like to see lilies tackled next. ‘The lily’s stains and the perfume can be an irritant and so make allergies worse,’ she said. 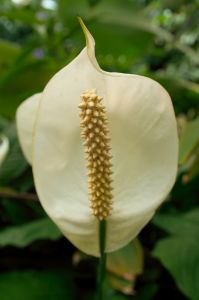 And this is just some lily.

By Jonnymccullagh (Own work) [GFDL (http://www.gnu.org/copyleft/fdl.html) or CC BY 3.0 (http://creativecommons.org/licenses/by/3.0)], via Wikimedia Commons

So hayfever victims could yet get to plunge their noses deep into a lovely bouquet and take a good long inhale. We love you, Mr Science.

Top Tips For Tuesday: Make Your Own Flowering Tea