And so, we turn to bonny Scotland!

But before we take a look at the flower which embodies this mist-skirled land (here's a hint: it's in the National Anthem, and ye wouldnae want to step on one in bare feet), have you checked out the other blogs in our Six Nations in Flowers series? We've covered the enigmatic Italian lily, the surprisingly confusing English rose, the regal French fleur-de-lis, and the ancient Irish shamrock.

And now, onto that prickly Scottish favourite: the thistle. 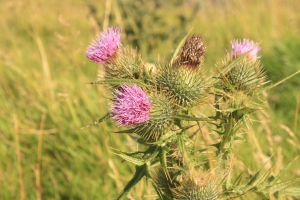 And of course (as we tenuously link this blog to a popular rugby tournament), this flower is unique amongst the Six Nations, as it's the only one which you'll hear getting its very own musical tribute on the rugby pitch: the famous Scottish (technically unofficial) national anthem: Flower O'Scotland.

This anthem, which in true Scottish style tells of a battle with England (an early Calcutta cup, perhaps), doesn't name the thistle, but everybody know what the eponymous Flower is. Plus, it has a pretty great story attached.

The legend goes, that when in olden days the Vikings invaded Scotland, a group of fierce Viking warriors attempted to sneak up on a battallion of Scots warriors where they slept. But just as the VIkings closed in to commit their murderous deed, one put down his VIking foot - upon a thistle!  He cried in pain, and woke the sleeping Scotsmen -- who were then able to arm themselves, and fight off the invaders.

So it may not be the prettiest flower in all the six nations, but when it comes to a fight, there's no flower quite like the thistle: the Flower O'Scotland.