Spooky Hallowe'en Stories: The Story of the Jack O'Lantern

You can't avoid it: shops and houses decorated to the max with black and orange, pumpkins piled high in the supermarket aisles, and most of all that crisp late-October tang in the air that says: here we go, chaps. We're heading for winter.

So the other day, we brought you some great images from around the internet of awesome carved Jack O'Lantern pumpkins - check that blog post out HERE.

But what is a Jack O'Lantern?

Long ago, in Ireland, there was a miserable old farmer called Stingy Jack. Stingy Jack was not the sort of man who you'd like to invite inside for a nice cup of tea and a chat. Stingy Jack was a grumpy, mean, unpleasant old man who got a kick out of playing tricks on everyone. And one day he played his biggest trick ever.

Stingy Jack played a trick on the devil.

Somehow, he tempted the devil into climbing an old apple tree. And when the devil was up the tree, Jack drew crosses all around the tree, meaning that the devil could not climb down. Jack refused to take the crosses away until the devil promised that Jack would never go to Hell.

But when Jack died, many years later, the Angel at the Gates of Heaven would not let him into Heaven either. So banished from Heaven, and banned by his own trick from Hell, there was nothing left for Jack to do but wander the earth as a spectre.

But taking pity on him, the devil threw him a glowing ember from the lakes of fire in Hell, an ember which would never dim. Jack placed the ember into a hollow turnip, and ever after, he would use the light of hell, spilling forth from this carved pumpkin, to light his way as he wandered the earth without rest.

And this is the tale of Jack O'Lantern. 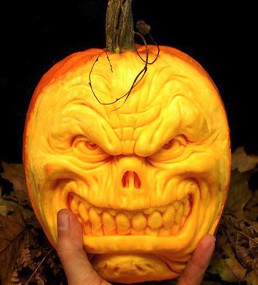 (Psssst...we can't carve your pumpkins for you, but we can help your Halloween party look amazing. Check out our Spooky Halloween Flowers here!)

A Font of Flowers