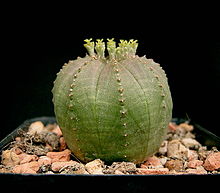 Welcome, watchers and woebegones, to Weird and Wonderful Wednesday, where we will wow you with whimsical wonders and whatjimacallits from wherever they wander!

That's quite enough alliteration, don't you think? So with no further ado (except this bit of ado right here), we give you -- the baseball plant!

There's a fair chance you've actually seen a baseball plant yourself, because their funny appearance has made them very popular for gardens and ornamental displays. And you can see why: these pudgy, ridgy, spherical plants have something essentially comic about their appearance that just makes you want to take one home. And possibly cuddle it. Er, or is that just me?

Sadly, people haven't proved quite as good at taking care of this plant as they have at taking it home. While a flourishing population survives in "captivity", the plant is increasingly endangered out there in the wild. We are reliably informed that this is because of poaching and over-collection, and not because people actually try to play baseball with them.

Although some people probably do. People are silly.

All about Ikebana - Japanese flower arranging