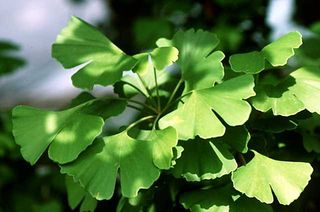 Tiny insects feasted on gingko trees like this one when

Six tiny, ancient insects from northern Spain, just two millimetres long, have been found dusted in tree pollen. The pollinated insects got trapped in sticky tree sap sometime in the Late Cretaceous, which then hardened into amber, preserving them for scientists to study, 105-110 million years later!

What does this mean? Well, anyone who screamed when they saw Jurassic Park can rest easy – we won’t be creating hungry velociraptors any time soon. But what this discovery does show us is another step in the developments of flowering plants – a development that has led to the sumptuous blooms and bouquets we love today.

Researcher Carmen Soriano explained the findings: "This is the oldest direct evidence for pollination, and the only one from the age of the dinosaurs," she said. "The co-evolution of flowering plants and insects, thanks to pollination, is a great evolutionary success story." 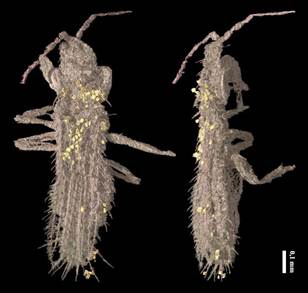 This X-ray image of the 'thrips' shows pollen clusters

The pollen in the insects – known as thysanopterans, or ‘thrips’ – is from a gingko tree, a living fossil which still exists today. The thrips, now the oldest pollinators known to science, would have developed pollen-carrying hairs to transport pollen food from the trees, eventually leading to the evolution of flowering plants.

"Thrips might indeed turn out to be one of the first pollinator groups in geological history, long before evolution turned some of them into flower pollinators," Soriano said.