After last week’s spine-tingly look at the darkly beautiful Black Bat Plant, we’ve decided to take you around a few more plants which might just leave you feeling that little bit chilled. But while dear old Batplant just sat there looking like a vampire, these plants have a little bit more going on. It’s …it’s almost like…

Don’t understand? Just look below, and you’ll soon see what eye’m on about (oh dear)… 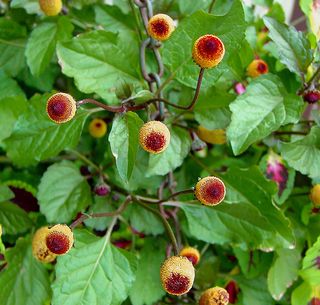 Is it any surprise that this has become known as ‘Peek-a-Boo’? Those twirling tendril stalks, those peeping red pupils staring out from a yellow eye…it’s not that hard to imagine these plants turning to watch you as you stroll past them in the garden. Turning to watch you, and then whispering softly about you, right on the edge of your hearing.

(As well as bringing the chills, these plants, just like Batplant, can be useful – Peek-a-Boo leaves can be shredded into salads, or cooked as leafy greens. Meanwhile, an infusion of the leaves with a few of the creepy flowers is a traditional remedy or stammering, toothache and throat complaints – possibly because it helps to stimulate saliva)

Now, if you thought that plant looked at you funny… 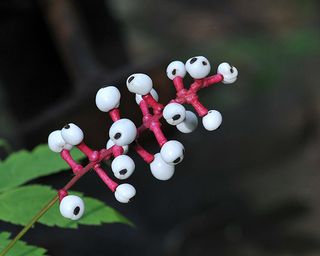 This plant is known to some as the Doll’s Eyes, but its usual name is scarcely any less sinister; this is the White Baneberry (just try saying that quietly to yourself in your spookiest whisper: white …bane…berry…*shudder*)

Dolls, of course, are creepy enough by themselves, as anyone who’s read or watched Neil Gaiman’s Coraline will know. But while the friendly Eyeball Plant ultimately proved to be a force for good, the mean ol’ White Baneberry is every bit as evil as you’d think: these terrifying berries are highly poisonous, and can cause cardiac arrest leading to death.

So it’s a good job that no-one in their right mind would want to eat them, really.

Flowers of the Royal Jubilee