Vincent Willem van Gogh is widely remembered today as a great artist. Though never widely recognised in his lifetime, subsequent to his death many generations of art lovers have fallen for his thick brush strokes, heavy textures, and his insistence of preserving the integrity of colour above all else. A van Gogh masterpiece is yellow and blues, strong oranges and pulsing warm earth tones.

And of course, anyone with a love of both flowers and art is likely to have a special place in their affections for Vincent van Gogh; flowers were, alongside self-portraits, his signature style. Perhaps the most famous of his paintings is ‘Sunflowers’.

So it was with considerable distress that researchers at the Kröller-Müller Museum in the Netherlands recently observed that the colours on one of van Gogh’s beautiful flower portraits, Flowers in Blue Vase, are slowly fading into grey.

Scientists from the University of Antwerp extracted microscopic samples from the painting to try to figure out exactly what was going wrong. The areas where the samples were taken are marked with squares on the images below: 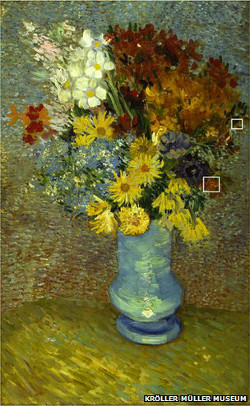 The yellow which van Gogh has used is called cadmium yellow. This would normally grow paler with age – but in this case, it was actually turning grey. When the scientists examined the paint samples which they had taken, they discovered the reason – a compound called cadmium oxalate, shown in this picture from the University of Antwerp.

"The contact layer between the varnish and the paint, where the cadmium oxalate is found, is micrometer thin," said scientist Dr Janssens.

"If we had not used methods that allow us to interrogate this very thin layer, we would never have noticed that there were oxalates there."

The oxalate is thought to have got into the painting from a varnish which was applied, ironically enough, to preserve it. Van Gogh himself never liked his paintings varnished, so the offending oxalate must have been applied by an art collector who got his hands on the painting after van Gogh’s death.

"I don't anticipate it will be a wide-scale problem for our particular collection, given its conservation history," said Ella Hendriks, the museum's head of conservation.

"But of course it's always good to be aware of the possibility that you could come across this in other paintings. This type of information for conservators is very valuable because it helps us understand the condition of the paintings and make the right choices about how we can best conserve them."

The Positive Effect of Flowers on Workplace Productivity