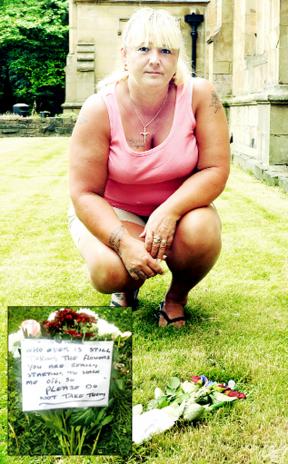 A Burnley woman has been forced to leave notes on her dead mother's grave asking flower thieves to please leave the flowers she places there alone.

After having more than ten flowers stolen, she has begun to leave letters with messages such as: "Whoever is still taking the flowers, you are really starting to hack me off. Please do not take them."

Tracy Yates, 46, said: “Since we bought the plot we’ve had nothing but trouble. We’d had it about a month when the flowers started disappearing. I just can’t understand why somebody steals flowers from a church and especially off my mum.

"I go up there four times a week and I put the flowers in the bin if they’re dead. I would never disrespect her by leaving dead flowers there.”

The rector, Canon Tom Bill, said that "“We have never had any other complaints, the flowers go when they are past their life span and everybody is quite happy about that. Dead flowers don’t look very nice.” But he made no suggestion that healthy flowers would ever be removed -- leaving Ms Yates to wonder exactly who would sink so low as to take a blooming bunch of flowers from her dead mum's grave.