Continuing our Six Nations in Flowers theme, today we're going to look at the floral emblem which is inextricably linked to France:

Unlike England, France don't actually put a floral emblem on their rugby shirts, choosing instead to decorate the players' kits with a cheerful looking rooster. Which is a shame, because unlike England (read about the confusion associated with the Red Rose of England here), France has a legitimate floral emblem. And it looks a bit like this: 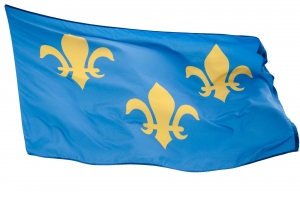 The fleur-de-lys is a stylised lily, and it was for centuries the symbol of the French Royal Family. Of course, these days France is pretty famous for having gotten rid of its Royal Family. And as the royals disappeared, so too did the fleur: after the French Revolution, the lily was removed from the flag. It has a brief return in 1815, but was removed again in 1830.

However the imagery of the Fleur-de-Lis remains inextricably linked with shows of French nationalism: don't be at all surprised if you spot a few in the crowd next time the French XV line up!

In our next Six Nations in flowers blog, we'll be looking west, finding out about the Floral symbolism of Ireland.