Welcome to the final instalment of our Six Nations in Flowers series, And what a journey it's been! We've travelled via the shamrock fields of Ireland to the rosebushes of England, trodden on a spiky Scottish thistle, gazed at the bloodred Medici lily of Italy, and bowed to the regal fleur-de-lis of France. And now, in alphabetical order as promised, we make the final stop of our Six Nations tour: and we're in Wales.

And if ever there was a nation associated with its national flower, it must surely be Wales -- and the daffodil.

But the remarkable thing about this passage through the national flowers of the Six Nations has been the recurring theme of accident: England wear a rose for unknown reasons, Italy take the lily from the Medici who take it from the French, and so on. Very few national flowers actually have a simple past or clear symbolism.

And so it is with the daffodil.

Because the national flower of Wales was never intended to be the daffodil. No, the original national emblem was that other great Welsh cliché: the leek.

So how did leek turn into daffodil?

Surprisingly, it's a matter of linguistics. The Welsh word for leek is: cenhinen. The Welsh for daffodil is: cenhinen Pedr (meaning 'Peter's Leek', but that's a whole different tale...). Over time, cenhinen and cenhinen got naturally combined, to leave Wales with two national plants: the tasty leek -- and the beautiful sunny daffodil! 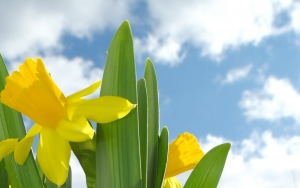 So this concludes our series on the Six Nations in flowers. We hope you've enjoyed the ride...and may the best flower win!